As engineers we do not believe in miracles and we are sure you don’t, either. During the development of the Aircosaver we conducted a lot of research and experimented with various principles that provide energy savings in other applications. We would like to share some of these insights with you.

We also came across all sorts of „unique“ devices and „magical black boxes“ that claim to save energy, which we will not comment further. Please be adequately suspicious and make sure you really understand what they do before spending large amounts of money.

For many years devices have been around that aim to optimize the operation of induction motors which frequently run on partial loads. The basic concept was invented by Frank Nola of NASA in the late 70’s. The aim was to reduce energy wastage on small single phase induction motors. Basically, these devices monitor the difference between kw and kVA drawn by an electrical consumer. Based on this difference, they then try to match the motor better to the load, e.g. by reducing voltage. This in turn reduces the magnetizing current and the iron losses and in turn improves the power factor (this then leads to some other, often detrimental effects).

There is a range of products available that all claim to be truely unique. This principle is employed by the controllers you can get from companies like Somar, Savawatt or Power Efficiency Corp.

Besides that there are devices available that combine power factor correction with a delay in power supply during each phase (like a phase cut-off dimmer), also termed „energy modulation devices“. Each sine wave is delayed for a small amount of time (few miliseconds) when passing through zero voltage. So a small part of each sine wave is basically chopped off. 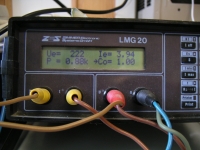 Our comment: Certain savings are possible with this principle if devices really are compensated badly or if supply power quality is very bad. Savings have been demonstrated, especially where oversized induction motors run idle for a long time such as in injection moulding machines. Most major companies that used to employ this technology have dropped it (Siemens, GE, etc.) because savings in typical applications were usually significantly smaller than expected. The available market prices for these devices lead to very long payback times. We could not make out any potential for typical air conditioners since they are usually compensated quite well. For very interesting discussions on these products go here or read this analysis.

Induction motors as they are typically used for compressors and fans in air conditioning systems, are limited to a very narrow range of speeds, they are basically fixed-speed motors. Their speed is determined by the constant frequency of the power supply (typically 50 or 60 Hz).

Inverter controls enable the fixed-speed motor to operate at variable speeds. The combination of motor and control unit is then termed „Variable speed drive“. Inverter controls are usually used on three-phase AC (alternating current) motors but can also be used on some single-phase AC motors. These controls use rectifiers to create an intermediate DC voltage out of the AC supply voltage. Out of the DC voltage the inverter then generates an AC output signal of varying frequency and voltage to the compressor. Most modern controls use pulse width modulation for the output voltage. Filtering harmonics and electromagnetic compatibilty are typical issues that need to be taken care of, but modern inverter systems have made significant progress in this respect.

Variable frequency controllers are probably the most effective controllers available today. However, to create a good system, the controller needs to be matched carefully to the load and the whole system should be designed with this approach. That’s what makes inverter controls rather expensive and difficult to retrofit. Whether an inverter control can be fitted or not needs to be examined in regards to the specific system. This in combination with the high cost is why inverter retrofits are usually only conducted as one-offs on large systems.

Our comment: Way to go!
Variable frequency drives are very effective energy savers. When replacing your old system with a new one, you should definitely buy a high-efficiency system including inverter controls. Very similar to the implementation in the AIRCOSAVER, these controls use sensors to define load and current efficiency of the aircon system and establish a control loop. Where the AIRCOSAVER switches the compressor off, the inverter will reduce the speed of the compressor (and potentially fans) to a lower level. Inverter systems are still clearly more expensive than other systems, but this will pay off over the system’s lifecycle. Retrofits only make sense for large systems and feasibility needs to be judged specifically for each unit.

In static duty cycling the aircon unit (compressor and/or fan) is cycled on a predetermined (fixed) pattern on and off. The background for this technique mainly lies in demand side management in terms of load shifting and peak demand reduction. Other duty cycling devices try to prolong the on and/or off periods based on monitoring thermostat calls. Several other methods have been proposed.

Our comment: These principles can save some energy but savings usually come at the cost of a significantly reduced cooling comfort since current efficiency is not taken into account. 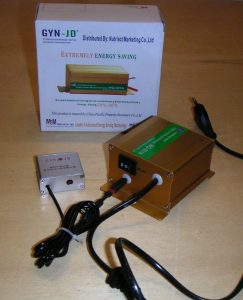 Recently we also analysed a Chinese product which claims to save 25% to 35% of energy. We were quite amused once we figured out how this device is supposed to work. Take a look at the picture. The little silver box is not a temperature sensor but it is a heating(!) element. This little silver box is placed over the aircon unit’s thermostat sensor! The thermostat sensor is then heated up inside the silver box… We measured temperatures of up to 50 degrees celsius on the surface of the heating element. Go figure.

Our comment: It’s probably easier and cheaper to simply turn up your thermostat by 10 degrees.

The AIRCOSAVER is an EPV Electronics solution ©2006-2017 Aircosaver.com. All rights reserved.